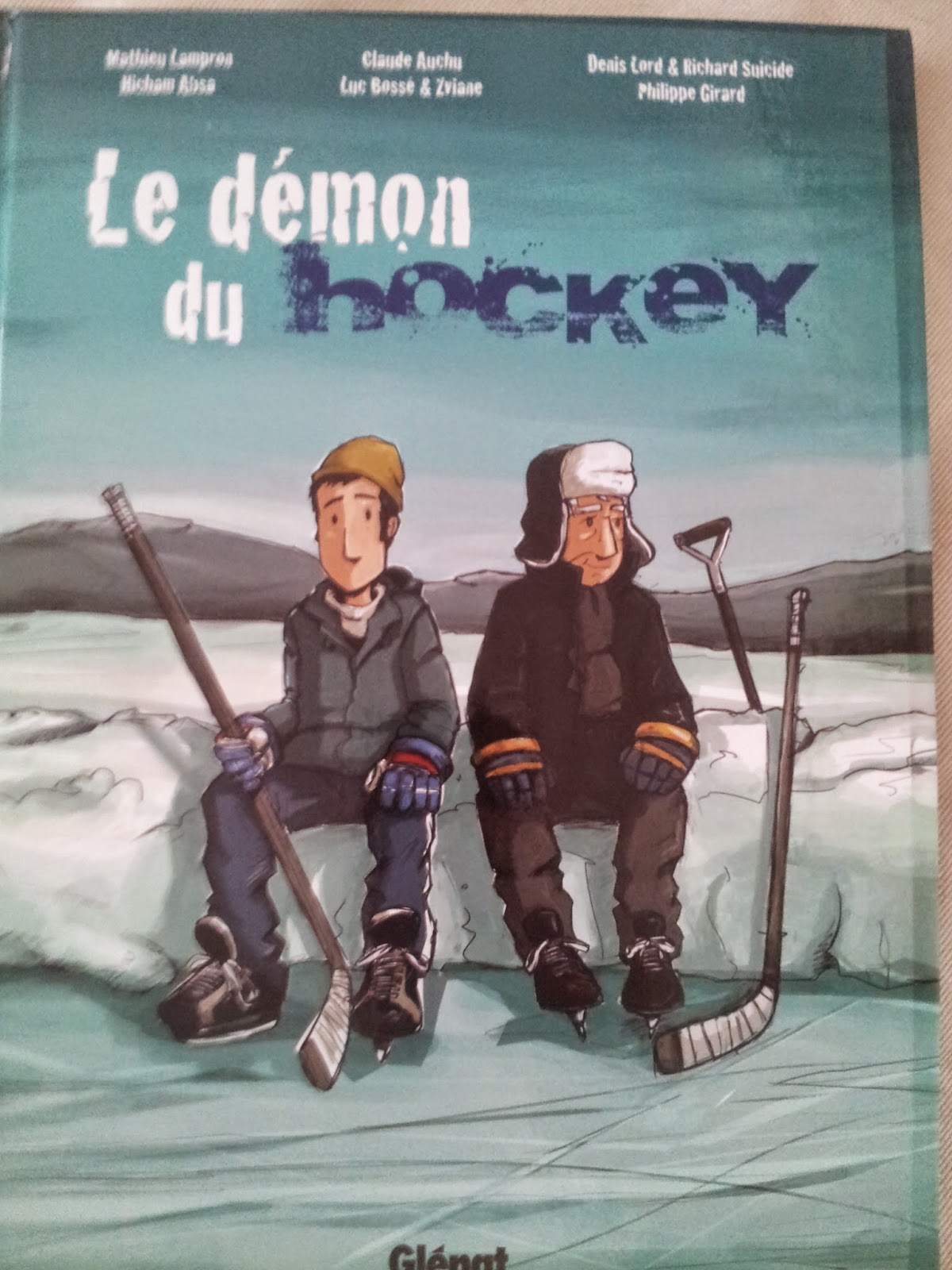 Last year, I discovered Zviane's work and I've been meaning to read more of her books since. Bestiaire des Fruits was hilariously phenomenal, Les deuxièmes (soon to be published in English as For as long as it rains by Pow Pow Press) and Apnée were also incredible. What better way to discover new work than by using the public library. I entered Zviane's name in the Ottawa Public Library system and I came across this book, Le Démon du Hockey. It's a collection of short stories with the ice skating, rubber-slapping sport as it's central theme. These stories are the winners of a contest launched by Hachette publishing in 2008 and was later published by Glénat in 2011. Zviane and Luc Bossé contributed a story.

I came to this book with a set of expectations. Some were met and some were shattered. The stories were surprisingly varied, ranging from the standard "Hockey is a magical happy thing for all" (which was the opening story of the book) and some less expected like "postapocalyptic world Hockey fight". In each case, the artists have infused their stories with what Hockey seems to represent for them, whether it be violence, comedy, family or drama.
The six stories here were interesting for the most part. The art is superb in all cases and surprisingly varied. We go from a minimalist free flowing page with simple colours in Claude Auchu's story "Le démon blond" to an eclectic trash, ultra kinetic work with Richard Suicide and Denis Lord's story "Gump Worsley était un plat régional patagonien". The colouring throughout is phenomenal. In particular, Richard Suicide and Denis Lord use of bright yellows, purple and greens contrast nicely with the typical colour of the ice skating rink (white with red and blue lines). I'd love to see the original uncolored pages for Mathieu Lampron's story "La classique hivernale". The details of the linework is phenomenal.

In spite of all this, I didn't really care for this book. The subject matter didn't interest me much so it was hard to invest myself too much in the book. I'm not a big fan of Hockey. I have no skills or balance on skates and playing with people who are faster and more skilled than I am at manipulating a stick is not something I enjoy. I like to skate, but leisurely, on the Rideau Canal in Ottawa at my own pace, sometimes with a drink in hand. But a team sport while skating is not for me. I recognize the appeal, but I'm indifferent to Hockey. I recognize Canada's long history with the sport and the place it has in our lore (or culture*?%&*W?&$%&). The Canadian winter cannot be avoided, so might as well put all of this ice to good use.

However, the two major things I take away from this book are the following. Hiscam Absa's work looks fabulous. I will seek out more of his work. His story, the postapocalyptic world story "Maudite rondelle", had a distinct dynamism that I rarely see. The movement and flow of the world he created is quite astounding. This is again enhanced by the colours, which are expected for the type of setting (postapocalypse is somehow brown and grey) yet is truly cleverly handled. The second major thing is that the work of Zviane and Luc Bossé borders on genius. Their collaboration on "Devenir grand", loosely translated as "growing up", is simply astonishing. I expected yet another story on the power of sport, team spirit and boring explorations about feelings and being a better person through Hockey. What we have instead is a touching story on child abuse and the broken family structure which fails to recognize real issues. We see the story of a boy who doesn't want to go to Hockey practices anymore. His coach is too rough on him. His brother acts like a jerk to him and insists he just doesn't like the coach. His mother encourages him to persevere because the coach is only rough to teach him valuable lessons. Besides, you may not like it, but it's all part of growing up. At practice, Coach gives a pep talk to everyone, but keeps our protagonist in the change room. He closes the door, then turns off the light.
One can read this as many things, but sexual abuse seems to be the first that comes to mind. It could also be on the difficulty of receiving criticism from someone you don't like much. I'll leave the reader to interpret it as they please. However, the red palette found throughout the story seems to emphasize this dark theme. It adds to the eerieness and outcast feelings of dread the child has. His life forever changed by whatever happens behind closed doors. I also read it as a commentary on Quebec's difficult history and tense relations with the clergy. Hockey being the new altar at which people pray, the priests of this sports religion, the coaches, take advantage of their power to abuse the innocent youth while we are too blind (or cowardly) to confront the truth. Quebec's history with the Catholic church and sexual abuse is long and painful and this story tackles this in a new inventive way. I saw "Devenir grand" as a fantastic multifaceted work that was much better than it had any right to be in a book celebrating Hockey.

Overall, an interesting book that I'd recommend mostly for 1 phenomenal story, 2 good stories and 6 competent tales by French-Canadian cartoonists.