Dotter of her Father's Eyes is a  graphic novel written by Mary M. Talbot and illustrated by her husband Bryan Talbot. It is fundamentally two biography narratives told together. We follow the life of Lucia Joyce, the daughter of James Joyce as well as the life of the author Mary M. Talbot, who is  the daughter of Joycean scholar James S. Atherton. The author juxtapose her story to that of Lucia Joyce's tumultuous life from her birth in 1907 to her schizophrenia diagnostic in 1935 where she was placed in a psychiatric institute and where she spend the rest of her life. Social and family expectations, gender politics and historical context eventually created a storm of tragedy for Lucia Joyce. This story is told conjointly with that of author Mary Talbots' life.

On many levels, this is a fantastic collaboration between the author and the artist. The life of Lucia Joyce is riveting and makes for a fascinating read. However, the author's biography feels like an attempt at exposing how rude, distant and mean her father was to her all those years. All the slights, fights and disappointment are portrayed in depth, almost to the point of exhaustion. Upon first reading, it felt like a long book on self-pity and a exhaustive account of wallowing in one's pain. It is not a negative point per se, but since it is juxtaposed to Lucia's story, the whole group of readers at the book club felt that this was an attempt to add importance to her own story by comparing and contrasting to her own life. In a way, this is isn't completely false, but I do not believe that it is the only reason. Mary Talbot's life as described in the book is nothing but ordinary, neither tragic, nor particularly exciting, just a life lived. The only thread connecting the two women seems to be their father and the traditional family upbringing view that their father adopted.

Talbot's approach to biographic work is reminiscent of the modern French biography.This current has been quite important in French Literature over the past decade or so. The biographer select a subject, sometimes important, sometimes not, and study it. It becomes less of a straightforward tale on the subject and more of an exploration of various topics (cultural, political, , time period, etc.). This effectively blurs the lines between biography, essay and fiction. Emmanuel Carrère's "Limonov", Pierre Michon "Vie minuscules" or Benoit Peeters "Derrida: A biography" are good examples of this type of modern French biography. Another good example is Benoit Peeters second book on French philosopher Jacques Derrida in which Peeters chronicles the process of writing the first biography of Derrida, his life during the process from research to publication. He also talks about Derrida, almost as a second thought, even though he is the reason this book is being made in the first place. Talbot use a similar tactic while writing the book. She uses juxtaposion as a mean to contrast two narratives. It also allows her to explore the themes she wishes to such as the importance of the father, family trauma, gender and failures. She blurs the lines between autobiography and fiction.

Style and colors reminds us throughout the book that even though the story wishes to create a link between the two women, they are indeed quite different and must be seen as such. There is actually three different styles throughout the book. The opening pages shows the Mary and her husband Bryan in the present, the colors are bright, realistic and well defined. They are the now and therefore looks the most similar to reality. From this, we are led to flashback of Mary's childhood. The pages are in shades of grey and beige and accented by dash of colors in very specific points. The grey-beige scheme could represent a mundane, uneventful life while the dash of colors is used to represent either important objects, to evoke emotions or simply to accentuate contrast.The traditional panel grid is also absent from any pages in the past, allowing for a much more fluid page layout which Bryan Talbot uses effectively.

Dark, cold blue, greys and blacks are used when it comes to Lucia Joyce's story. The color scheme represent the unnatural nature and drama of Lucia's life. They come from different eras, both from a cultural and societal point of view. Lucia Joyce lived during the First World War, the roaring 20's and Second World War while Talbot was born long after the war was over. She lived a life of peace, privileges, and emancipation and these are just a few examples of what separates the two women.

The colors are not the only trick used to differentiate the two narratives. A careful attention has been place on the characters eyes. Characters in Mary Talbot's era (past and present) have single dots in lieu of eyes, whereas characters in Lucia Joyce's era have much more developed eyes. Comparing it to the cover page, where Mary Talbot has two dots, we can see the difference. Surprisingly, the book club members did not caught on this point during our discussion.


My only problem with the book as to do with one page which was blatantly plagiarized. My favourite movie of all time is "The Red Shoes", a 1948 film by Michael Powell and Emeric Pressburger. It has been released by Criterion and here is their description of the movie: Red Shoes, the singular fantasia from Michael Powell and Emeric Pressburger, is cinema’s quintessential backstage drama, as well as one of the most glorious Technicolor feasts ever concocted for the screen. Moira Shearer is a rising star ballerina torn between an idealistic composer and a ruthless impresario intent on perfection. Featuring outstanding performances, blazingly beautiful cinematography by Jack Cardiff, Oscar-winning sets and music, and an unforgettable, hallucinatory central dance sequence, this beloved classic, now dazzlingly restored, stands as an enthralling tribute to the life of the artist.

Now why is this relevant to the book? Well, one exchange between Lucia Joyce and Samuel Beckett has been lifted wholesale from the movie. Not just any, but one of the most important passage. This young ballerina discuss with the ruthless impressario and she expresses that art, is just as important as life. For comparison purposes, I've included the youtube clip of the movie and the panels in question. 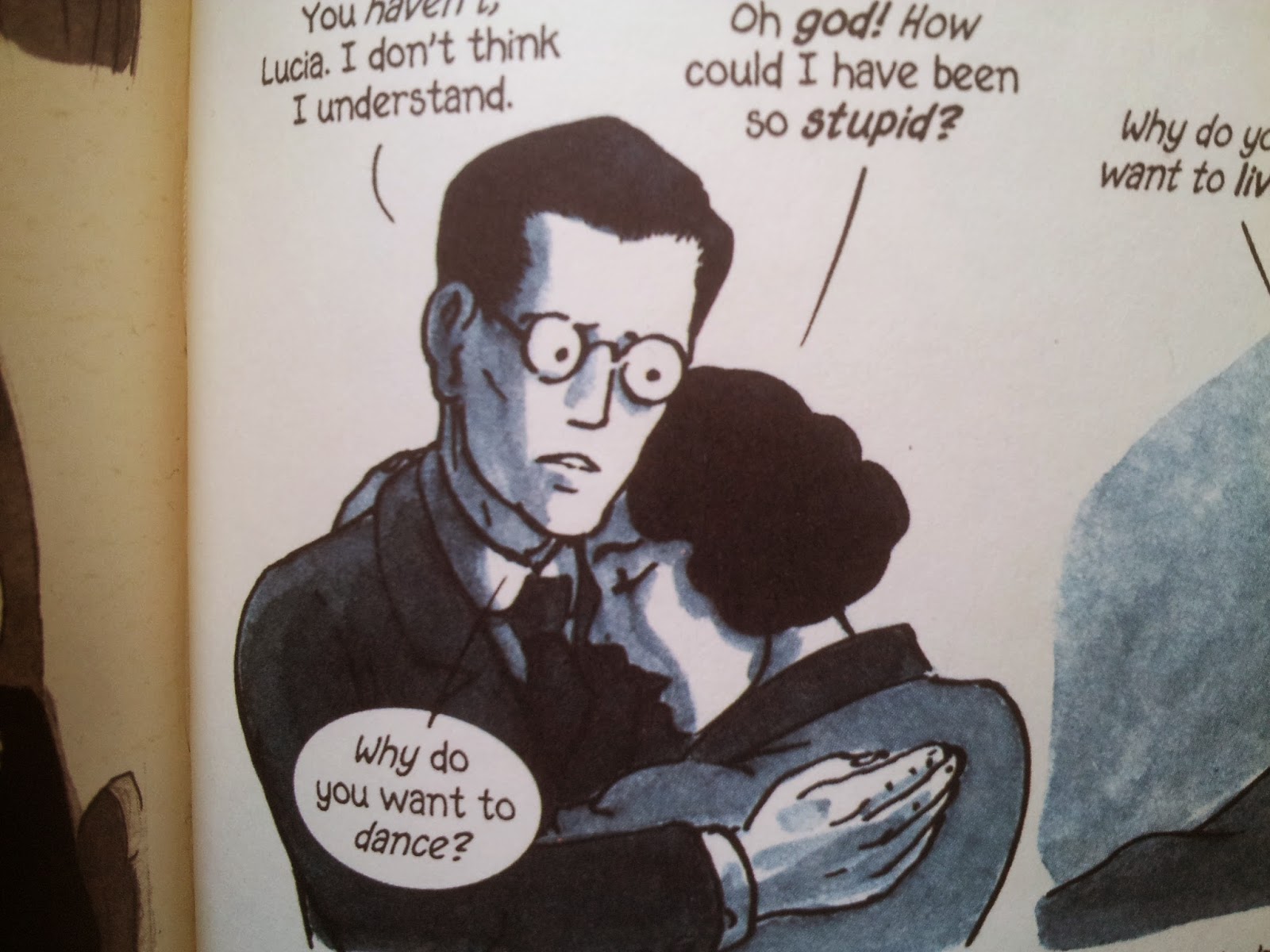 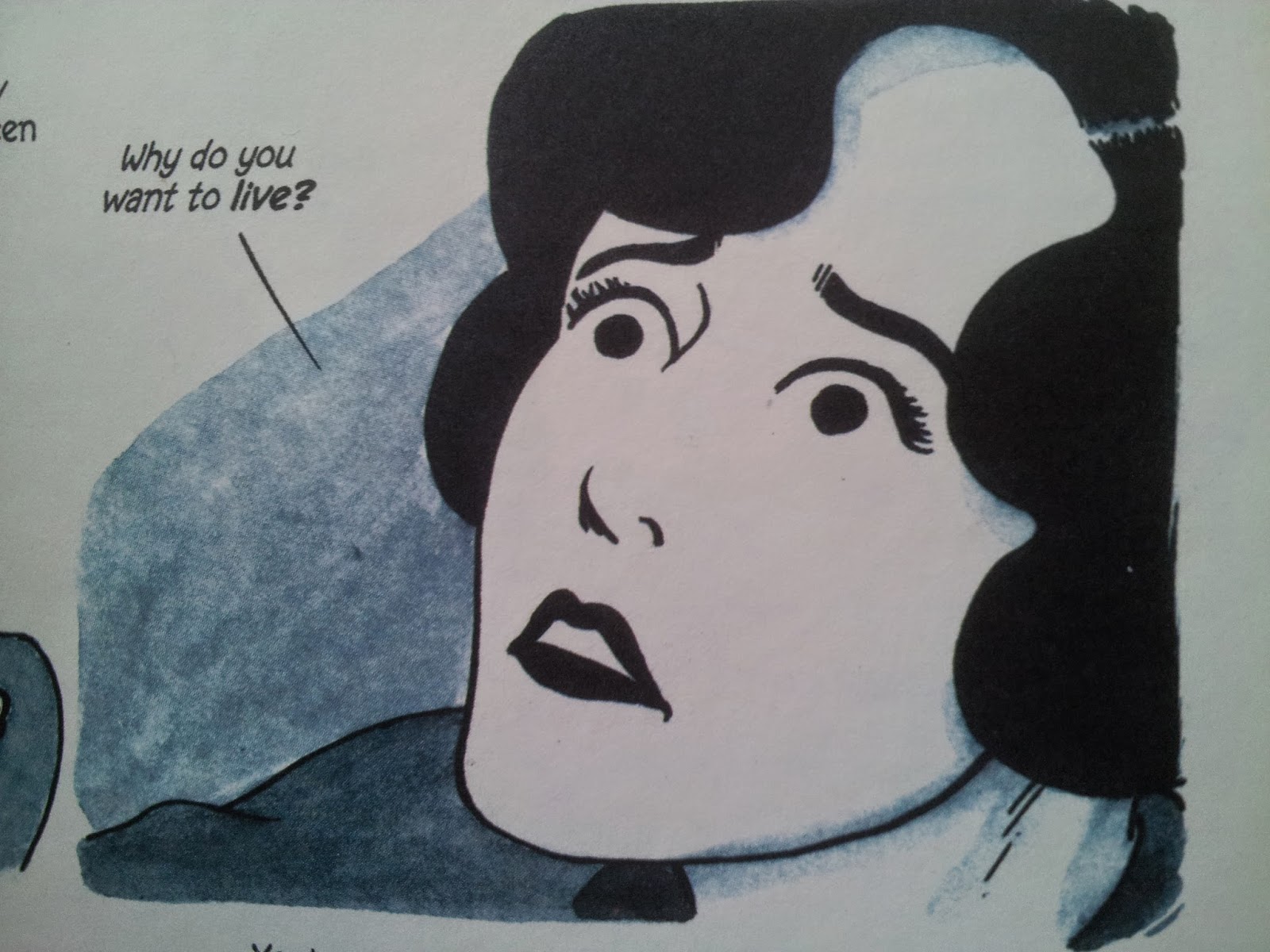 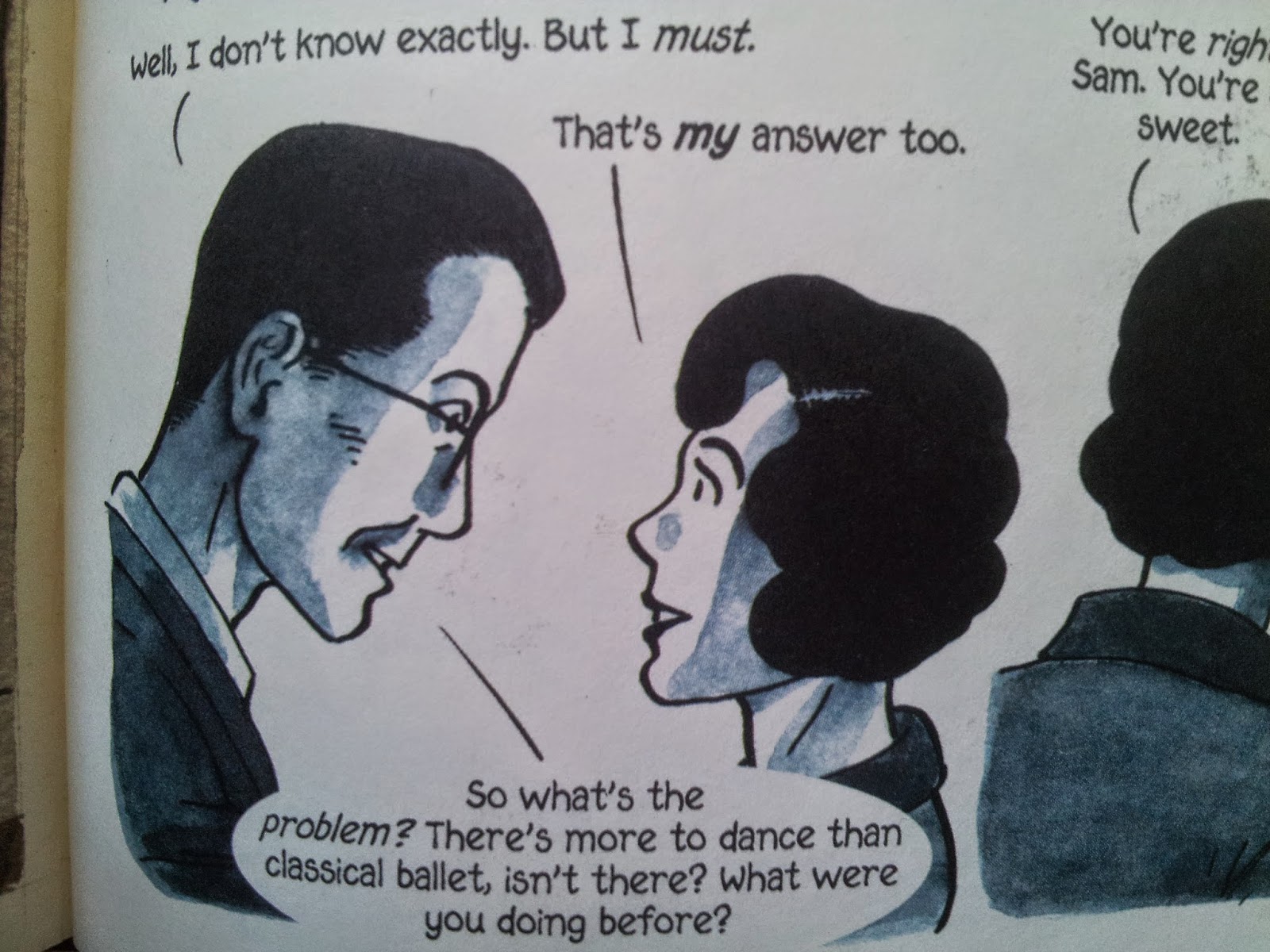 These three panels took me out of the book completely. I have done some research, but I have not been able to find any evidence that this is historically related to Lucia Joyce. If anyone has any idea on the matter, please feel free to write it in the comments.

Aside from this slight issue, the book is fantastic and I'd recommend it. The entire book club agreed that this book was a very good read. It is short, but incredibly dense. It,s an interesting exploration of gender issue, family trauma, life failures and color design. Mary and Bryan Talbot have created a captivating book. The Ottawa Comic Book Club unanimously recommend the book.