Steph Hill's: A Brief, Accurate Graphic History of the Environmental Movement (Mostly in Canada): A Key to History 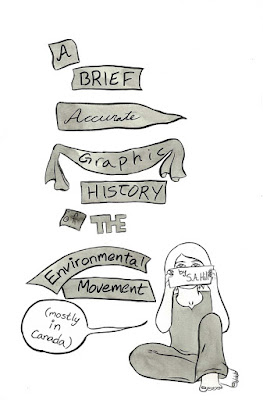 I picked up Steph Hill's A Brief, Accurate, Graphic History of the Environmental Movement (mostly in Canada) while in Vancouver last April. I was intrigued by how such a small comic would convey the history of the environmental movement. It is a movement born out of necessity to counter the changes affected by the modern development of our planet. Canada's economy relies on natural resources, so if we look at the example of forestry and the lumber industry, the past centuries have affected massive changes on the way wood is cut and sold. Mechanization of wood cutting and transport has allowed for a greater capacity to harvest wood. Globalization meant that the market was no longer limited to it's geographic boundaries, but could expand beyond it's borders. The response, and opposition to these changes, have also adapted to reflect the larger scope of the issues being faced by the environment and Canadian citizen. S.A. Hill (or Steph Hil) tries as best she can to summarize decades of social changes that brought about the rise of the environmental movements and the specifics of Canada's place in this history. She succeeds in some ways, but falls short of explaining all that one needs to know about the topic, partly due to the nature of the topic and the short length of the comic.

Hill appropriately intersperses her comic with bits of trivia about her subject. It was quite jarring that her opening tidbit was about the US (Cuyagoha River in Ohio) and not Canada. I had to look at the cover a couple of times, to make sure I had the right comic in hand. Notice the parentheses "mostly in Canada", which allows a fluidity of examples to come into play. Hill does use some examples and trivia that isn't specific to Canada, but I think it works to the comic`s advantage. Besides, the reader quickly adapts. 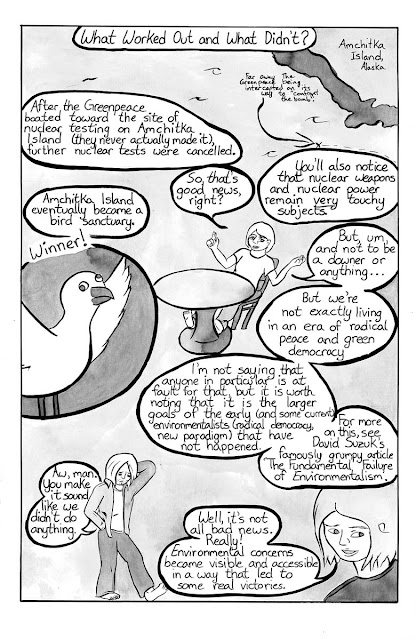 Hill manages to convey a lot of information in a short time. Although her focus is broadly on the environmental movement, how it started and how it took shape from the 1960's up to 2014, she is able to bring into focus both organizations and individuals that were important to the history of the movement. This humane approach is quite interesting and complements the subject nicely. She is able to balance the constraint of history and the personal aspects of the subject really well. She starts be defining the historical context, then focuses narrowly on some specific aspects of it before bringing it back to the larger context. My main complaint may be that some elements are brought up without much detail on why they may be relevant. It was a bit jarring when I didn't recognize the name of an event being described (I had to look up what Silent Spring was for example), but I guess this was inevitable given the shortness of the comic.

There is a lot of information in this comic, none of that "infotainment" nonsense. Hill wants you to learn. She uses her art to make history interesting and aesthetically pleasing, but never trivializes her subject. You'll come out with a better understanding of both the movement and the issues at stake. 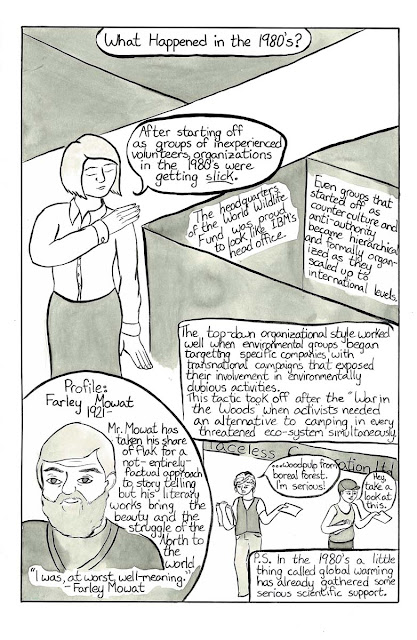 Although her art might appear simple, her page composition is not. Hill doesn't adhere to a standard page layout, she uses a free flowing approach and this allows the information to be displayed innovatively. I feel the topic may have been too dry otherwise. A rigid panel page would have tied it down too much, encasing it in a rigid structure that would have limited the flow of the comic. Her approach allows the reader to follow the comic organically and absorb the information much faster.

Hill's drawing is simplistic, but efficient. Her figures and characters are consistent, but I feel that she may have a harder time with facial expressions and differentiating facial features. I could hardly tell if stand-in characters were supposed to be the same from one page to the next. This hardly matters though, the comic isn't a narrative about characters, but about history.

Although I do recommend this comic, I feel it would be an incomplete recommendation without additional reading material. The comic is good, but left me wanting for more. I guess it reached it's objectives in trying to teach me about the environmental movement; now I want to know more. A good companion book might be Climate Changed: A Personal Journey Through the Science by Philippe Squarzoni or Oil & Water by Steve Duin and Shannon Wheeler. And for those of you who may prefer comics without drawings (also known as books) here are some other suggestions: Hot, Flat and Crowded: Why we Need a Green Revolution, by Thomas Friedman and Moral Grounds: Ethical Action for a Planet in Peril, a collection edited by Kathleen Dean Moore and Michael P. Nelson. The NASA also has some resources, though mostly focusing on climate change HERE. You can read A Brief, Accurate, Graphic History of the Environmental Movement (mostly in Canada) in it's entirety online.

All images taken from S.A. Hill's A Brief, Accurate, Graphic History of the Environmental Movement (mostly in Canada)
Posted by Leblanc_phil at 15:23