This is the first of a new feature I'll run in several parts: short reviews of some comics of note at TCAF 2015. 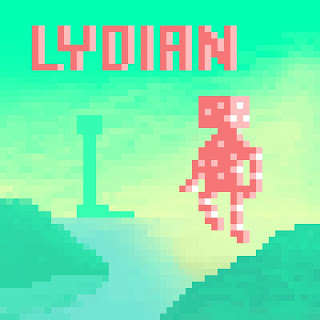 
A fantastic new comic by Sam Alden. I had seen some bits and pieces online on his tumblr page in the past, but never saw the whole thing. It is now published with a wonderfully bright cover design. The back cover is also particularly nice. Lydian tells the fantasy adventure story of a young man who fights Clyde (an evil sentient resort - yes really, a resort) and his minions alongside the team he created. It's done in a sort of old school video game 8-bit color style. Although at first glance you may think this comic is purely a stylistic exercise, but it is a surprising look at the psyche of a teenager with confidence and personal issues, who`s trapped in a weird and dangerous world.

This book, particularly in printed form, adds a second layer of meaning that I didn't anticipate going in. The 8-bit color era is for the most part gone, which makes a nice parallel with the paper format of books. I can imagine that some people much younger than me will be reading this on their tablet and not once wonder about the reason for a book made out of paper in the first place, or why this computer art looks so pixelated now that we have access to such sleak computerized images. The existence of both of these forms of art being relegated to the past makes this feel like an artifact and a fresh new take on comics at the same time. 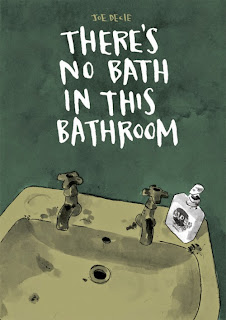 A free giveaway from Joe Decie at TCAF that I would have gladly paid for. In There's no bath in this bathroom, Joe Decie tells us about his visit to Toronto when he attended TCAF 2014. Decie describes his experience and moves effortlessly from the mundanity of travel to the small surreal moments that happen to all of us when we are in unfamiliar territories. Whether it be the Francophone girls at the train station, the bathroom in the pizzeria with the lights turned off, or even the cook eerily walking outside, those small events provide a good look at how one person internalizes the experiences of travelling. 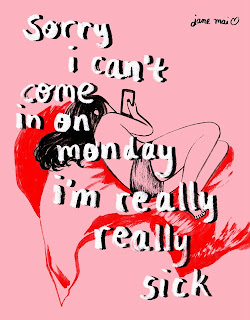 Koyama Press published this mini-comic from Jane Mai. It's a collection of random thoughts from a depressed woman sitting at home in her underwear. It packs a surprising punch for such a small comic. The thoughts we read range from dark humor to deep revelation about humanity and oneself. The image of a centipede running throughout reminds the reader of the difficulty in truly pinpointing depression. Sometime we are able to see it clearly, most other times it is hidden, but it is around us, lurking in the shadows of bad days and small losses that the people around experience. In spite of the bright pink cover and it's size, this comic will make you think and perhaps even reflect on your own mental state.