I've been thoroughly enjoying the Bitch Planet project. I'm saying "project" and not comic for various reasons. Bitch Planet is the comic of course, but it's also about fandom, feminism, social media feed, the American penal system, the Non-Compliancy logo, Twitter, the essays and fanmail. It is just starting to gear up to comment on sports culture. It's about reappropriating 70's prison exploitation imagery and using it towards a new feminism ideal. It's about the medium of comic books themselves and the superhero genre, so prevalent in American Corporate comics, with it's ideas of what justice looks like. Mainly white males punching people and dispensing justice the only way they can, by crass vigilantism with no oversight, beholden to no one but themselves. In Bitch Planet, the super villain is not a person, but a social construct. Patriarchy taken to an extreme level.

I have found it incredibly difficult to detach the comic itself from the rest of the elements surrounding it. Some are having an easier time than I, but I strongly believe the Bitch Planet experience is not complete without those elements. It is an ambitious project and one that is quite needed. We are in an era of renewed antifeminism, men's right movements and gamergate is still raging. This reminds us that struggles of women and the challenges of gender equality are not over. It is here, we're in the thick of it. There are still huge gaps in pay and income disparity both in the U.S and Canada.

Bitch Planet follows a group of women, non-compliant within the fascistic patriarchal order of the world, who are sent to a penal colony on Mars. They are mistreated and abused, not only in prison, but back home, where women are constantly under surveillance by a society that`s run by the "Council of Fathers". So far only three issues are out, but quickly a pattern has been established. Each issue has a standalone narrative that also serves to advance the main plot. In #1, the basics of the world are established and we see the story of a man who got rid of his wife for a more compliant (and younger) woman. In #2, one of the protagonists, now in solitary confinement, gets asked to lead a sports team and we see the story of a man working for the patriarchal order, where we witness it`s inner workings and constant power structure. Issue #3 is the story of another protagonist with flashbacks to her younger days and her experiences of systematic abuse from society. Bitch Planet relies on both its premise and its short form structure (each issue). 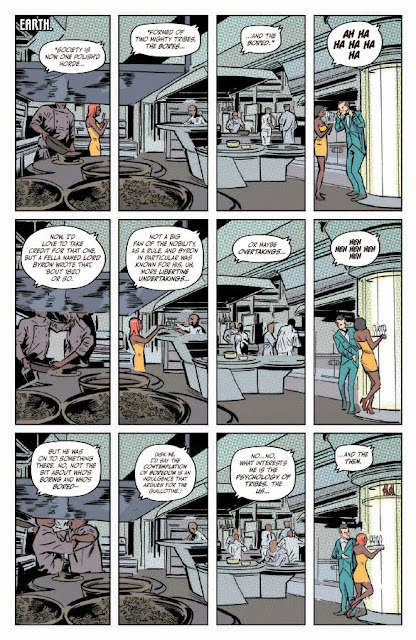 The art is quite distinctive too. The colors are remniscent of silver age comics, with it's dot patterns atop the colors. It's quite clever, the comics take inspiration from the 70's "women in prison" films and have integrated the comic colouring style of the time by using the dot pattern. There is also very clear attention paid to the story told both at the forefront (what drives the action) and what is in the background. We learn a lot about the world the story takes place in by just looking at the pages. We absorb the details and are rewarded with a better comprehension of the story. It works on a macro and micro level. It's refreshing to see. As silly as it may sound, a lot of comics have a hard time conveying their stories visually with any amount of subtlety. The macro level takes all the focus and the other visual aspects are only stock elements that don't add anything. But here, Valentine De Landro and Cris Peter really knock it out of the park. The first page of the 2nd issue is a really good example of this. The action moves in three sections of 4 panels with the red-haired woman walking towards the end of the room. The final panel of each row (panels 4, 8 & 12) all show a man either telling the woman what to do, or taking advantage of her. It is significant as it is the last thing we see on the page as a reader, bu it also emphasizes the story elements: the men are in control; to go and do your job, you must be subservient to a man. We understand from the setting that they are in a kitchen and about to walk out to a fancy event, as evidenced by the kitchen setting, the fancy cocktail dresses of the women and the champagne flutes they carry around. The text is part of the speech given in the other room and it contributes to the world-building elements. 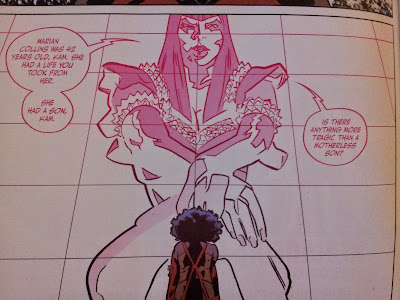 What I believe really distinguishes this comic are the final pages. They contain a short letter from the writer, Kelly Sue Deconnick, as well a essays on feminism by a panoply of authors and some fanmail. Kelly Sue Deconnick's essays are fantastic. They are shifting the focus away from the fictional setting of the book to add a layer of reflexion to our modern world. This project isn't just about comics; it's about a larger conversation on women's right. It does what all good science fiction work must do: encourage us to reflect on our world. By encouraging interaction and dialog with the fans and followers, they are encouraging a broader discussion on the topics they are engaging in. Not only are we reading a sci fi book about women in prison, we are learning about society in the process. And knowledge is key in moving the discussion forward and educating ourselves and the people around us.

I'd recommend Bitch Planet in a heartbeat. For one it's a good comic. It's technically well done, well-written and pretty. You could read only the comic and not get involved in the other aspects of it. But for any of you who may be unsure what the answer may be to the ongoing vitriol pouring in from seemingly everywhere directed at women, this is part of the solution. The status quo requires you to be compliant. Read the essays, learn, and question the way the world works; be non-compliant.
Posted by Leblanc_phil at 18:01