What does it mean to be a doctor? And as a society, what do we expect from our physicians and specialists? A doctor is someone who practices medicine, helps to cure and treat the ailments, injuries or pains of his patients. As a society, we want them to be competent, pluripotential and for them to be able to respond to the healthcare needs of the community. If they are specialists (ranging from surgeons, pediatricians, neurologists or anything else), we expect them to be efficient, knowledgeable and excel in their functions. The last century has seen major changes and increasing demands on healthcare systems. We live longer and our health care needs have changed. We face challenges to improve quality of care; to be equitable and effective; and to provide care in various locations and conditions across the country without reducing the quality of care. This means that our doctors are required to deal with increasingly challenging environments than they were before. We need our doctors to be socially accountable. We need our doctors to provide quality health care to a diverse and under-served population. They need to be able to meet the numerous needs of various patients in this increasingly medically complex world.

Dash Shaw's Doctors was a very interesting read for me. Improving medical education is what I do for a living so this tied my career and my hobby together quite nicely. One of the main struggles of the book is to balance the requirement to meet society's needs and being socially accountable while remaining loyal to your immediate environment. 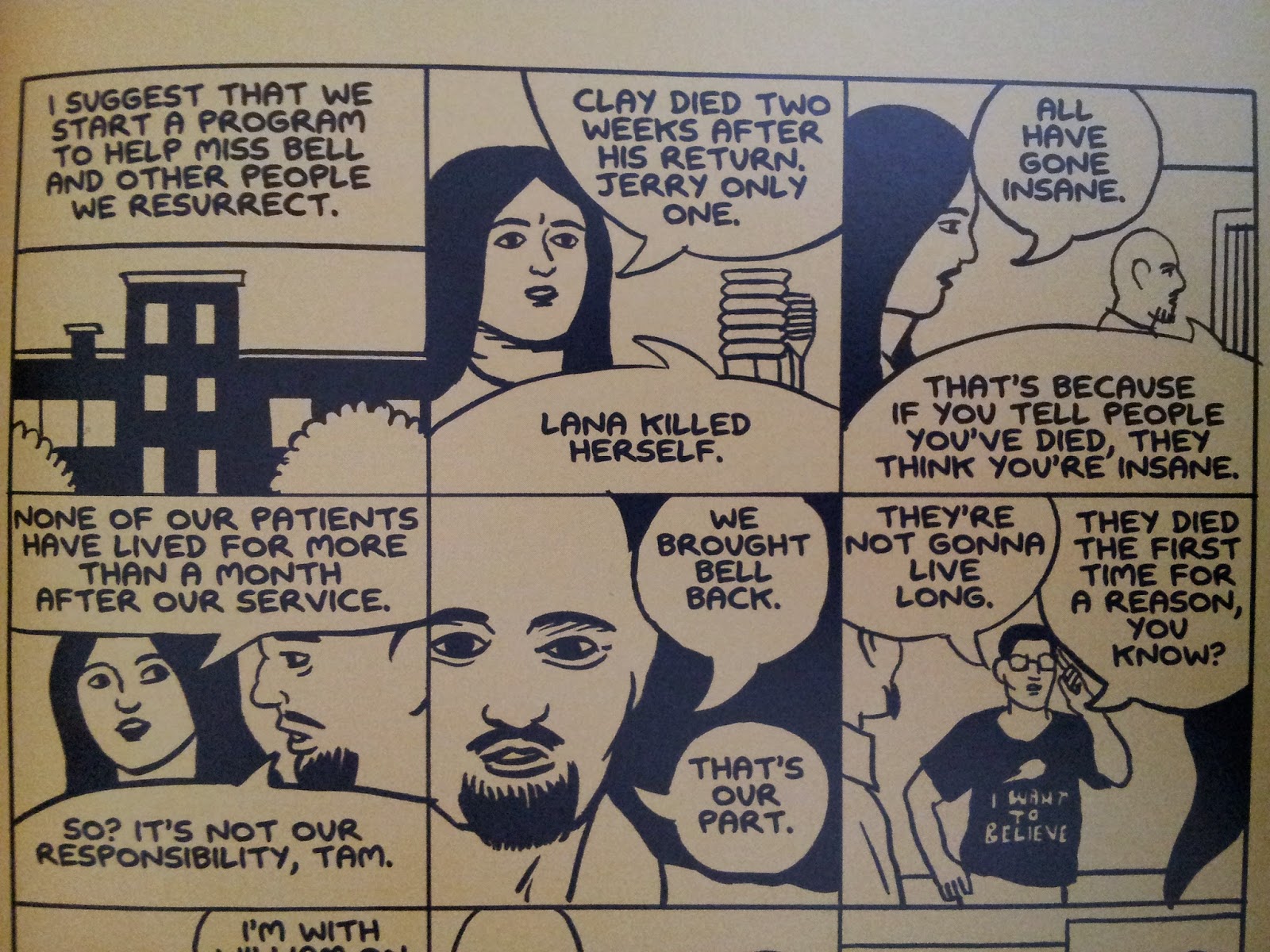 A team of Doctors operates clandestinely using a machine called the "Charon". It allows it's user to invade the brain of a dying patient minutes before dying as they are creating the afterlife they want, or feel they deserve in their final moment. While in the brain, they try to bring the person back to life, away from the light at the end of the tunnel, if you wish. We follow Dr. Tammy Cho (daughter of the inventor of the Charon) as she attempts and eventually succeeds at bringing a woman named Bell back to life  But bringing someone back doesn't mean that they are cured and all survivors suffer from severe depression after being reanimated. And how could you not? In a way, after seeing what is waiting for you on the other side, be it love or despair, you would know it to be eternal. Wouldn`t that be incredibly depressing no matter the outcome­? We read of Dr. Cho's struggles to reconcile her father's control over the machine and its use for profit as they embark on a dangerous operation. We also follow's Ms. Bell's attempt to recapture what she saw in the afterlife and her failure to live up to her final dream.

One of the main struggles for Tammy is to find, not only meaning in what she does, but also how to make sure it benefits society. She is well aware of the potential benefit of the Charon and that it should be used more widely. She asks her father: "Why aren't we a charity?" Why aren't we helping out society? Why are we unaffordable? The search for profit might not be the only thing that matters she seems to say. She genuinely wants to help and provide better treatment to her patients. She knows of the severe depression her patients suffer after being revived (p.45). She knows that it should be part of their duties to help their patients deal with the trauma. What is the point of reviving someone if you know that, without a doubt, they won't be able to handle their return?

Her father, Dr. Cho also has a ludicrous number of misconducts that relates to his career. For him, being a doctor is a success in and of itself, and to be successful, you need money. He cannot consider that in a situation of need, he would be expected to help someone for free. He even let in to his friend that he wouldn't save him for free. When his friend Clark jokingly says "With you around, I don't have to worry about dying." Cho simply answers "Don't push your luck". He also measures his success in terms of how many patients he brought back from life, not their survival rate, which is abysmally low. When Miss Bell breaks his car window, he mumbles that "She broke the car she paid for. She's gonna die soon anyway". Reading this, I felt that he must have known that his conduct was severe malpractice. He operates clandestinely, without supervision of any kind and he constantly worries someone will tell on him. When his daughter asked him why they weren't a charity, he answered that "it wouldn't work. The Catholics would shut us down." I think he meant any sort of health care regulatory body would shut him down. 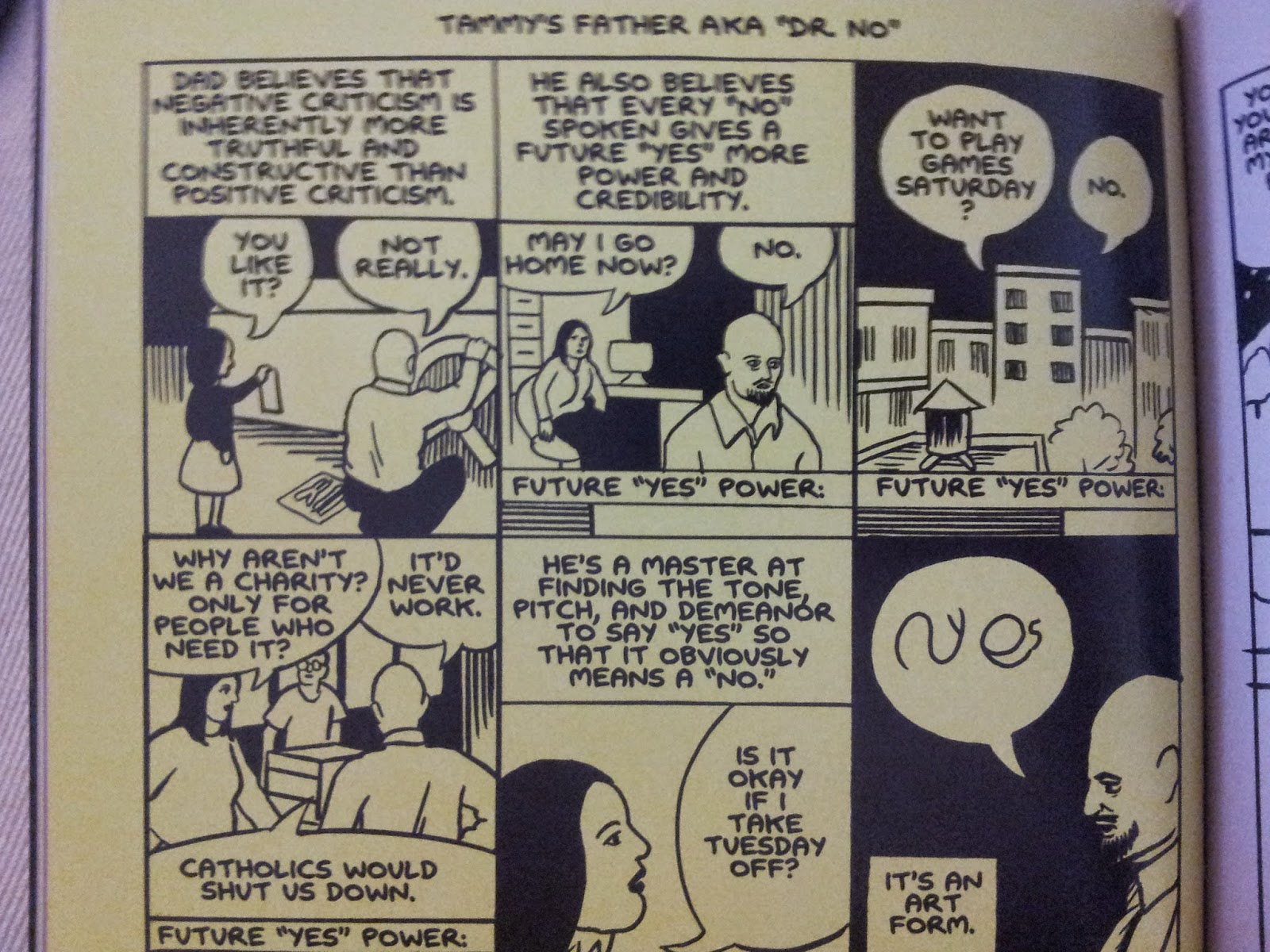 Trauma is also another recurring element of this book. For Tammy and her father, their trauma stems from the loss of the mother. She died during a robbery that went wrong. The killer was found and killed, but the wound never healed. She was the emotional core of the family and once gone, her family lost their happiness. Now the pain has hardened Dr. Cho, and only the pursuit of his work can soothe the pain. In a lot of ways, his personal life stopped when he lost her. For Miss Bell, the damage that came with her revival is unbearable. In her afterlife, she fell in love with the pool boy, a young man who loved her despite her age and fortune. He simply loved her for who she really was. The shock of coming back to life and losing that happiness is intolerable. The depression that sets in afterward is overwhelming and insurmountable. Those traumas define the characters and only the tragic circumstances at the end of the book will allow them to move on. 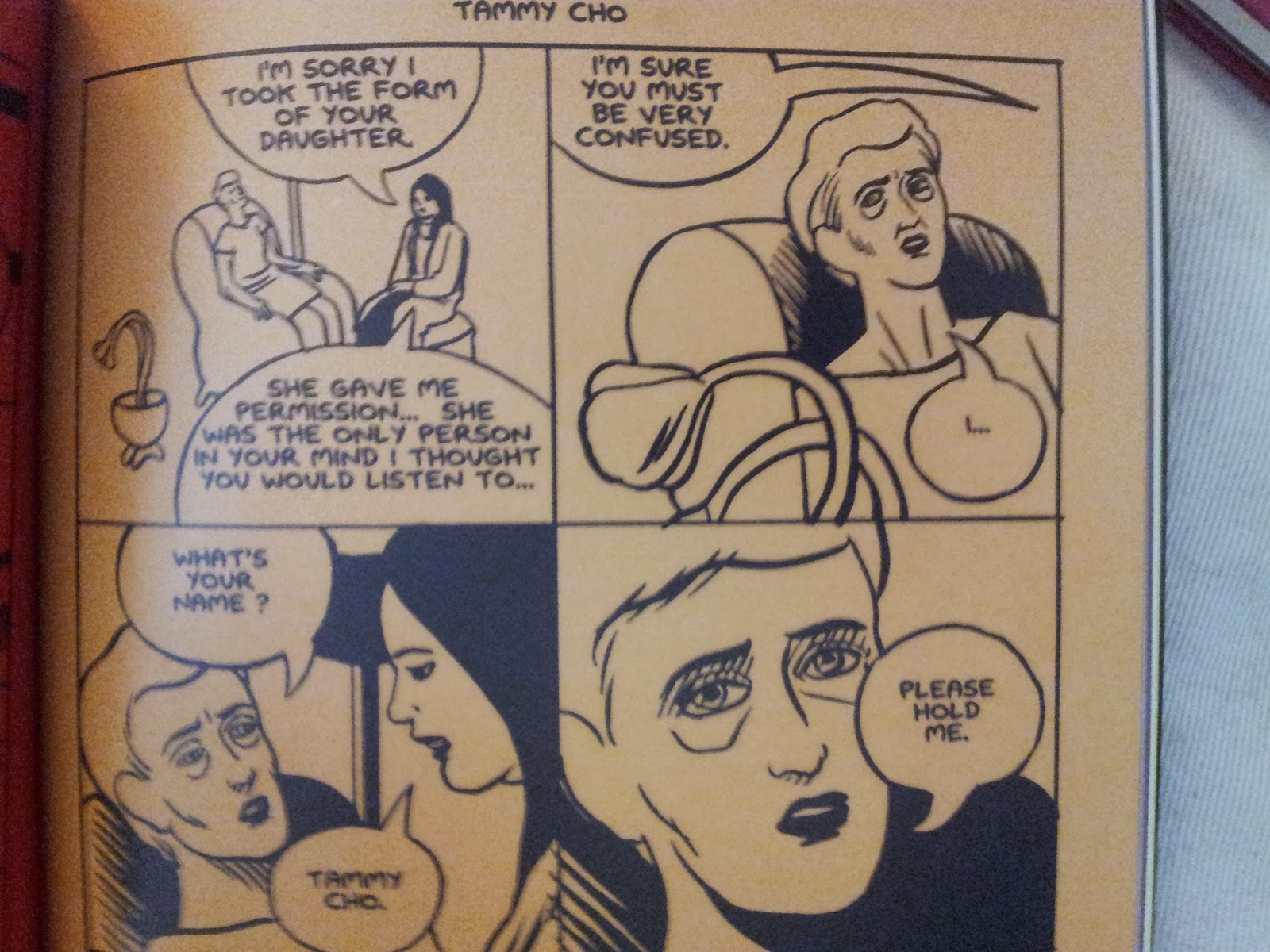 Depression is not only the plight of the survivor, it is also the plight of the living. Both Tammy and Will struggle with everyday life. The toll of working on the edge of the afterlife is particularly impactful for them. Tammy is constantly wondering whether she`s alive or not and checks regularly for sensations (like heat) that she wouldn't feel in the Charon. A constant reminder that she is still alive. She also struggles to reconcile the dichotomy of her work. She wonders whether she is ending up like her patient Ms  Bell, "Drifting through life, waiting to die" only to end up with delusional thoughts of self-importance to justify living through another without sinking deeper, "I'm like a magician Our work is going to be famous and studied for centuries". She's unable to make meaningful connections and spends her nights lost in the game "The Sims", where her avatar is a surgeon so she "can really be helping other sims". Will is not much better. He reflects on the Egyptians' view of the afterlife, struggles to find love and thinks dark thoughts about the inevitability of death and the collapse of civilization. "Eventually your consciousness sputters out. You dissipate. You fade to Black. Just like how eventually our whole world, every culture, will explode and we'll all just be fucking cosmic dust. We'll all dissipate. We'll all be nothing and everything. What's more spiritual than that?" 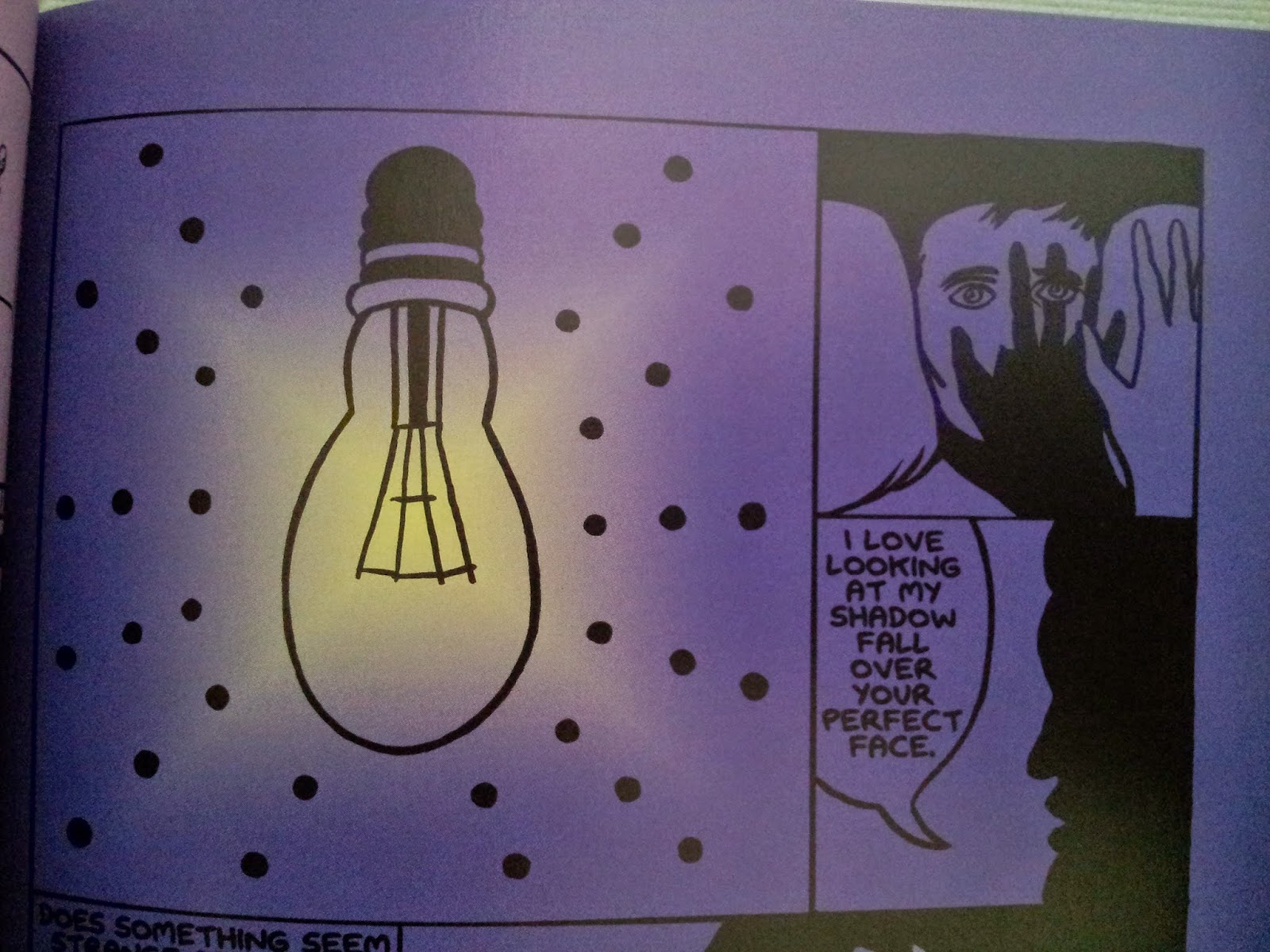 Dash Shaw also makes good use of color. Each page is of a single color and this adds depth to both the drawings and the tone of the story being told. This is also helped with the way that the story is told: all through vignettes of 1 to 2 pages. The color helps convey information on feelings and the tone for each page., The effect works much better here than in his previous work "New Jobs", The goal was the same in both books, but the effect was different due to the length and size of the page. "New jobs" was a single panel per page, and a small page at that. In Doctors, the story is displayed on multiple panels and it allows for the feelings to be conveyed more effectively. The color permeates the narrative of the page, creating feelings of melancholia, nostalgia, dread or light-hearted moments. 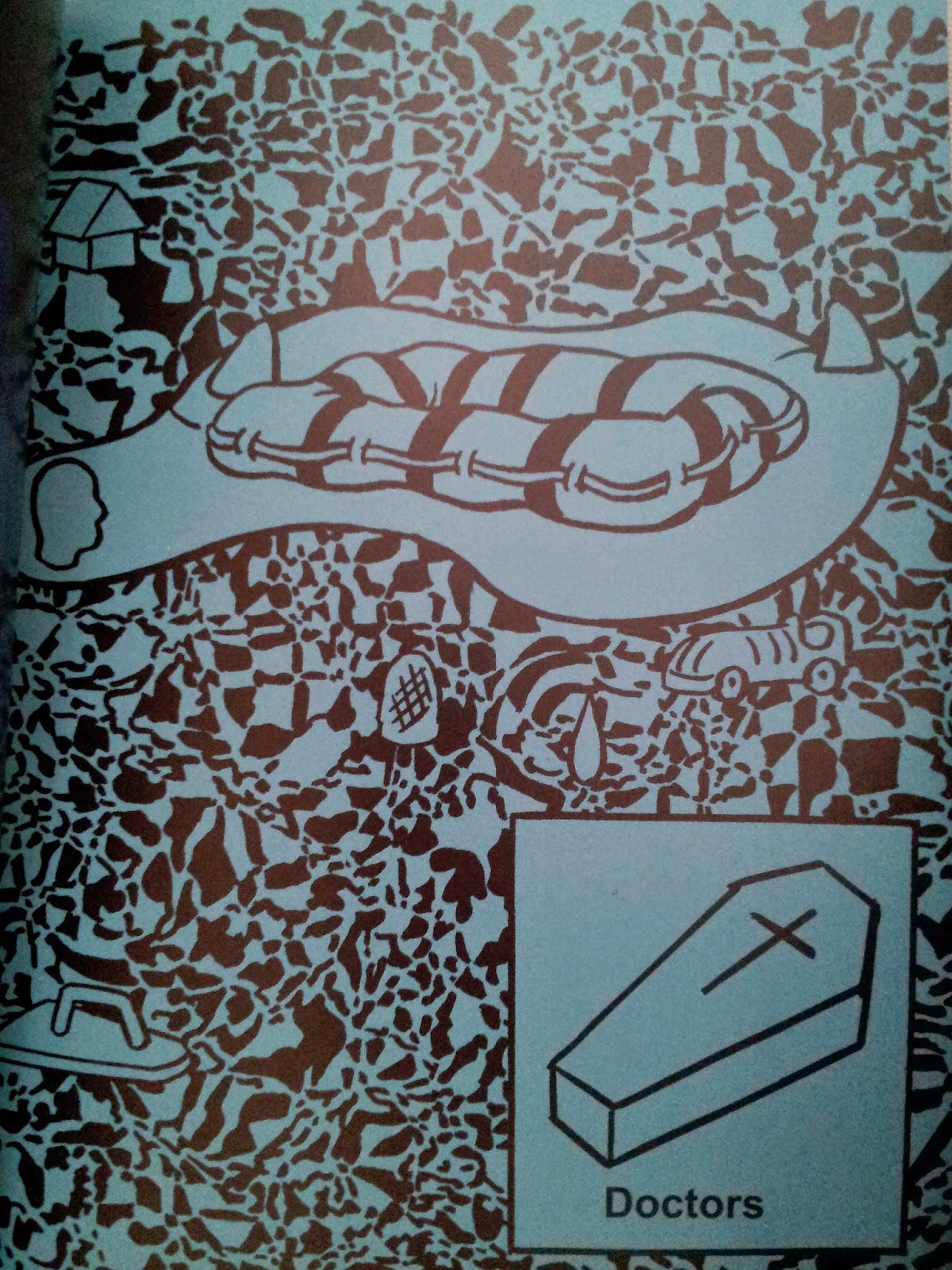 Dash Shaw created a remarkable book that is relevant to modern issues in medicine. It addresses mortality, spirituality and depression in a colorful package. I'd highly recommend this to anyone regardless of your interest in health care.
Posted by Leblanc_phil at 17:01