A little while ago, I felt like reading superhero comics. There is always a ton of options out there, but since I'm not a misogynist creep who likes to see dismembered body parts all the time, I figure I'd better stick to Marvel. I decided to look at the Marvel Now (Or All-New Marvel NOW!) and I actually adopted some monthly series that way, Ms. Marvel and She-Hulk have proven to be good enough to hold my interest for awhile.

I also tried Moon Knight. I like Warren Ellis's stories enough and thought I should check out this new series. I thought it was ok, but something just didn't quite agree with me. I couldn't place it until Ellis announced that he was going to leave the title. In an interview on Robot 6, he mentioned that :"The job has been, simply, reactivating Moon Knight as a productive property for the Marvel IP library". He also mentioned that he wanted to challenge himself at writing stand-alone stories. Knowing that even the creative team were just seeing  this project not as a writing gig, but as an Intellectual Property to be packaged and sold, how does this affect your reading of the book? Let's take a look


So what is an intellectual property and what does it have to do with our Moon Knight? Well, an Intellectual Property (IP) refers to creations of the mind, such as inventions, literary and artistic works, designs, symbols, names and images used in commerce. So the character is the property of Marvel Comics and it has not been very profitable them. They hired a creative to reinvigorate the property. What they wanted was to convince you to buy the book. It must be a "productive property" (a.k.a: a brand that sells). How did they achieve their goal? Tell the potential readership that this is a bold move, that they are bringing an awesome character back to life in exciting new ways. It will never be the same...It all begins now... Get excited people! That writer you like will be teaming up with hip new artists for a new take on that intellectual property we want to sell you. And according to Ellis, it's mission accomplished, or at least "a job reasonably well done".

I think more than anything, the blatant cynicism is what gets me. The mission is to revitalize a brand. Telling a good story and creating meaningful art comes second to the goal of making money. At least I can appreciate Ellis` honesty. 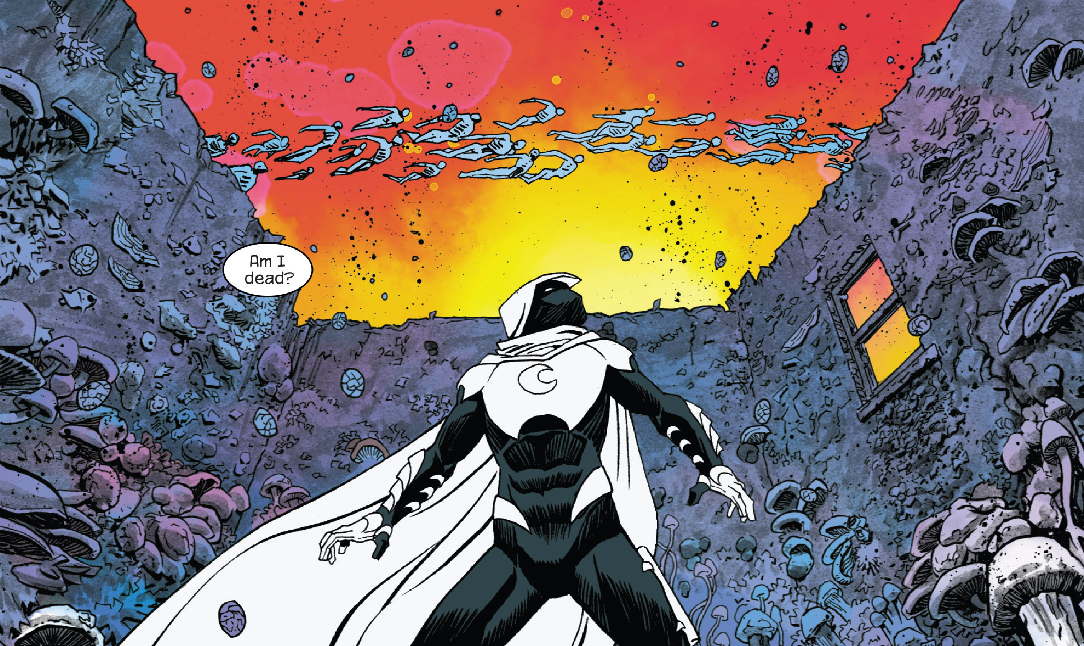 So how does this cynicism bleed into the fabric of the book? It creates a story that is more focused on "cool" and "awesome" moments than anything else. If anything, the story is almost inconsequential. The writer wanted the paycheck. The least he can do is let the artists take over and do a great job. Shalvey and Bellaire`s work shine through page after page in Moon Knight. The art works in perfect conjunction with the colours. The white of Moon Knight is not coloured, which creates a great contrast between the character and his environment. Colours then become the most important aspect of the character. His lack of colour also serves a story purpose as well, since he feels alone and isolated and unable to connect with the outside world. If anything, it's beautiful to look at.

In the end, I'm glad that there is no pretention with Moon Knight. It is created purely for a marketing and branding purpose. It doesn't hide its most mercantile aspect. I had originally been duped into thinking it was a piece of art. Now I know it's just a piece of corporate garbage.
Posted by Leblanc_phil at 16:44