Reflections on Guy Delisle's Jerusalem: Chronicles from the Holy City

I brought Guy Delisle's Jerusalem: Chronicle from the Holy City along for my summer vacation in San Francisco. This book was my first exposure to Quebec cartoonist and travelogue master Guy Delisle. I like the style and musings of Delisle who seems interested in writing about dangerous or controversial locations (Pyongyang in Korea, Shenzhen). It makes for riveting literature. 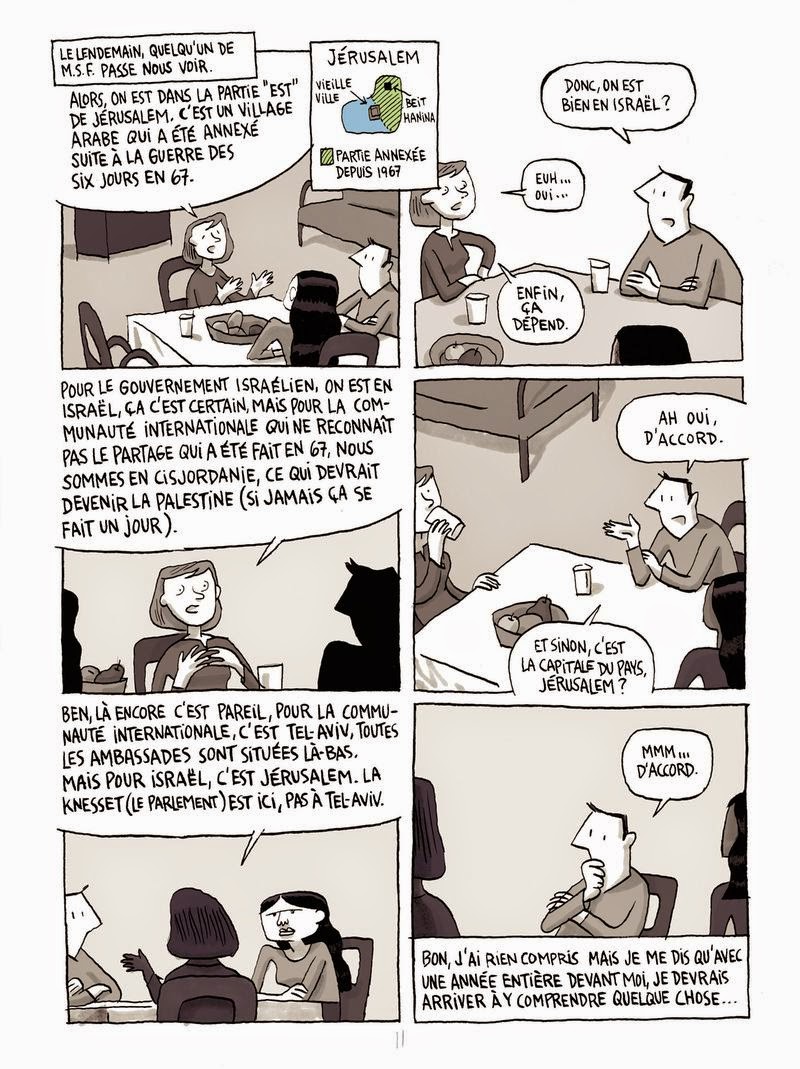 The basic premise of Jerusalem is that Delisle's wife works for Médecins sans frontières (Doctors Without Borders), which is referred throughout the book as MSF. She gets posted in Jerusalem for a year and Guy, her husband, can keep his career as a cartoonist there as well. They are bringing the kids with them and will build their life there for one year. Delisle chronicles through his book the contrast between the Holy and the Secular, the modern and the traditional and also, the private and the political. 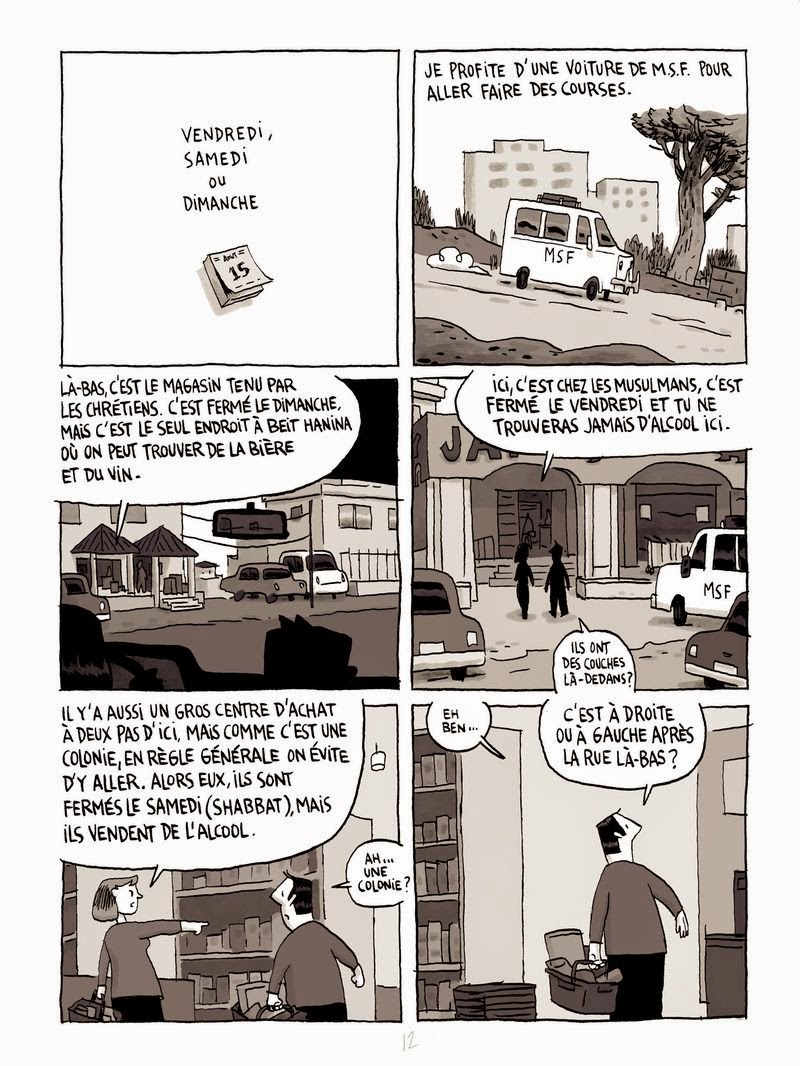 Delisle uses a "Slice of life"  as an easy way to explain the woes of modern day life in Jerusalem. He manages to simply explain the complex environment by relating his experiences there on a very personal level while trying to stay open minded and objective. A profound respect for the city and its inhabitant is found on every single panel (except maybe when he have some petty issues with some residents).

His presence in Jerusalem manages to raise some interesting questions, such as how to balance family life and career. We see the multiple schedules he has to keep, the distances, and the issues that arise from trying to keep it all going. Traveling in the city on a day-to-day basis becomes the source of many headaches with the blockades always in the back of one`s mind, so are traffic jams and which neighbourhood to visit and when.

Delisle also forces you to think about how to find compromises when everyone seemingly holds the truth. Jerusalem is a city of many faiths and many beliefs. It is a challenge to determine common grounds, yet Jerusalem`s inhabitants manage to do so every day, which is exceptional.

Delisle's art remains simple throughout the book. This appears to be his regular style and it works perfectly with the subject of the book. Jerusalem is such a complex city; it's geography, politics and culture are so rich, so dense, that the simple art style creates a welcoming contrast. 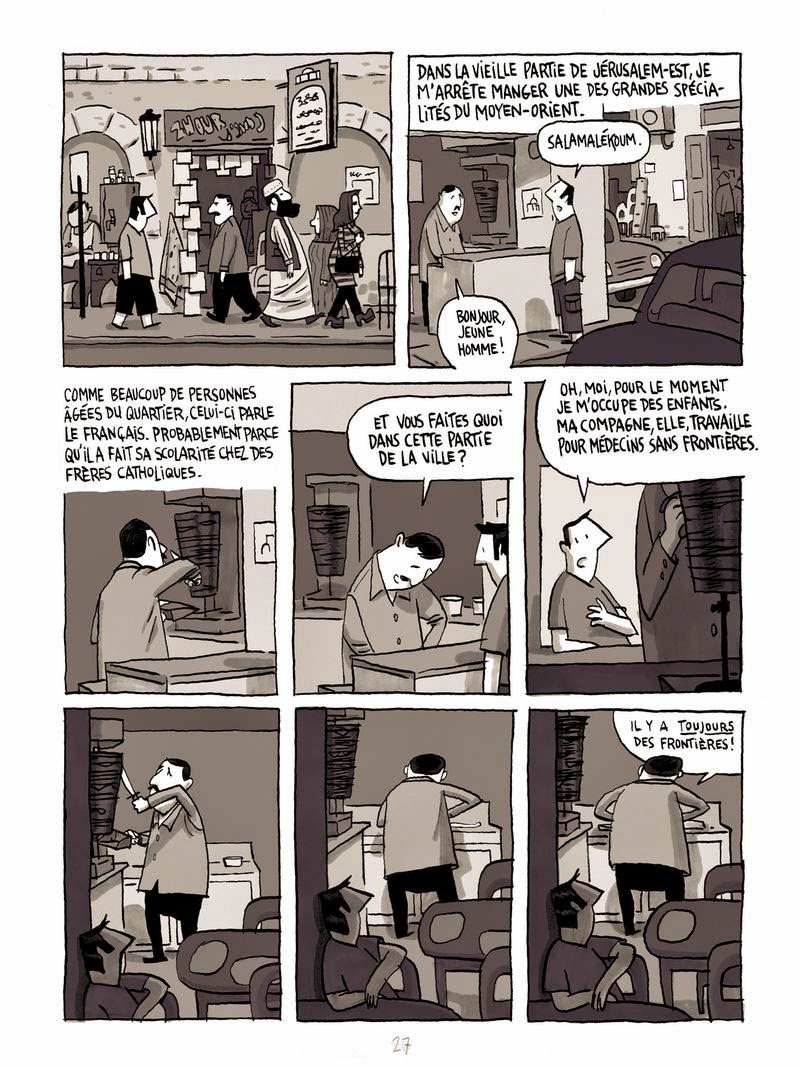 Although this book appears intimidating for both its length and subject matter, I would recommend it in a heartbeat. Delisle crafts a riveting tale of life amidst an incredible, if somewhat complicated, city. Regardless of your faith and opinion on the conflict, everyone can appreciate the author's account.
Posted by Leblanc_phil at 09:20