Jason's Lost Cat: A Lesser Work from a Superior Cartoonist

I fondly remember the first book I read from Jason. It was in 2005 at the time when my interest in comics had started to fade. I went to the lesser of two comic book shops in Quebec City and was going to get yet another boring, tensionless, consequence-free, idiotic X-Men comic. I knew I had to read better stuff. I was a teenager back then and this was a time of personal growth for me. As much as I had enjoyed comics, I needed to see something, anything, better than the piles of crap pushed by the big companies. And I started browsing the small independent section of that store (one shelf) for anything of value, anything of importance. I found Hey, Wait..., by Norwegian cartoonist Jason. A 64-page graphic novel about loss, adulthood, loss of innocence and comics. It was minimalist and incredibly bold. It was what kickstarted my love of the medium. I began obsessing over the book, talking about it to everyone I knew. First the story struck me, then the structure of the story, then the layout, the use of space, the line work. It had a huge impact on me. I strongly believe that if you enjoy something, you can never be content with just having it, you have a burning desire to know all about it's inner workings; how it was made; by whom; and why and when; and how it relates to everything else you know. Hey, Wait... was the key to the comic book world I needed. It opened the door to better books and a greater appreciation of the art form. Years later, I still buy every book from Jason that comes out. It is a deeply personal experience for me, a sort of "going back to your roots" moment with every new page.

This is why I chose Lost Cat as the first Jason book I should talk about. Because Lost Cat, is a surprisingly disappointing read. Not content to simply have it on my shelf, I must channel this burning desire to look at it from multiple angles until I can decode it. Let's take a look at why this book in particular is such a letdown. 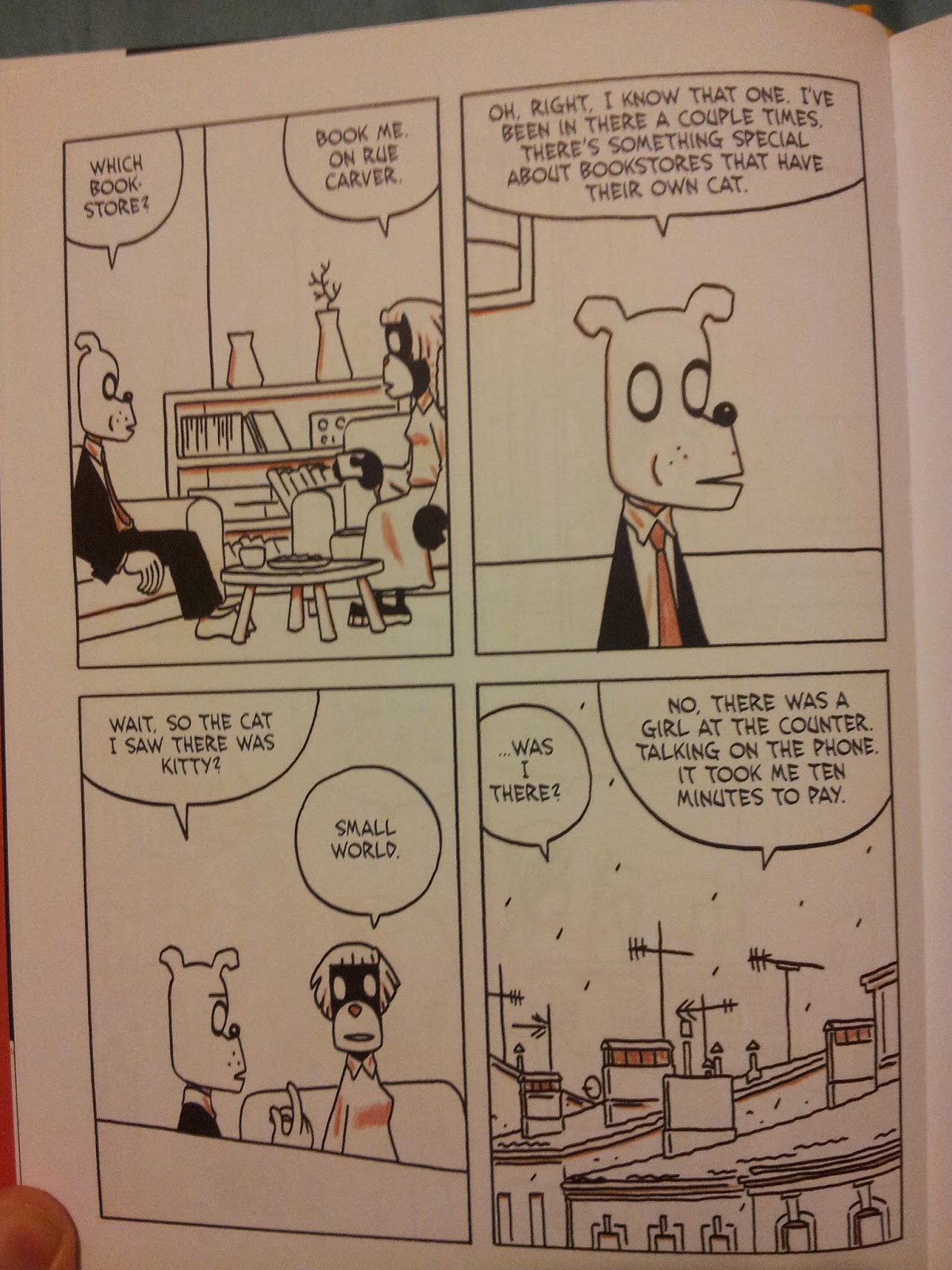 In Lost Cat, we follow Private Eye Dan Delon. As he finishes a very quiet day at work and heads home, he comes across a poster for a missing cat. As it turns out, the cat is nearby and he decides to return it to his owner. The owner, a woman around his age, answers the door and invites him in for a coffee. They sit and talk and this reveals their mutual sadness and desperation. In this moment, these two lost souls seem to find one another. They agree to meet again, leaving detective Delon enthusistically optimistic. Unfortunately, she never shows to their date, and worse yet, she has disappeared. Our detective investigates, and the woman remains very much in his thoughts. She becomes an echo; a vision of who he wishes she was. In his loneliness, he clings to to this woman, desperately so, as a way out of his misery. But loneliness follows him, and he cannot escape it. When our detective meets her again, it turns out she has a mysterious past and ulterior motives for being in the city. This revelation shatters his world. In the end, he'd rather fall into oblivion alone rather then face the flawed woman in front of him.

Jason developped a recognizable art style and it is in full force in this book. The characters are anthropomorphic animals. Dialog is sparse and used for dramatic or comedic effect. His style is minimalist, focusing on architecture, and small moments for the characters rather than the actions of the scenes. It works really well in this book as our detective is struggling with his loneliness. There are these long segments in which our protagonist stares at the void. He is alone in his apartment, he brushes his teeth, he sits and looks out the window. There aren`t many emotions or movement. It is slow moving and represents the dullness of everyday life and reflects on his state of mind really accurately. In most of his other books, the dialog is always used for a purpose, but in the case of Lost Cat, certain passages, mostly involving Detective Delon's parallel investigation, feel either redundant or unnecessary. This is one of the weaknesses of the book. 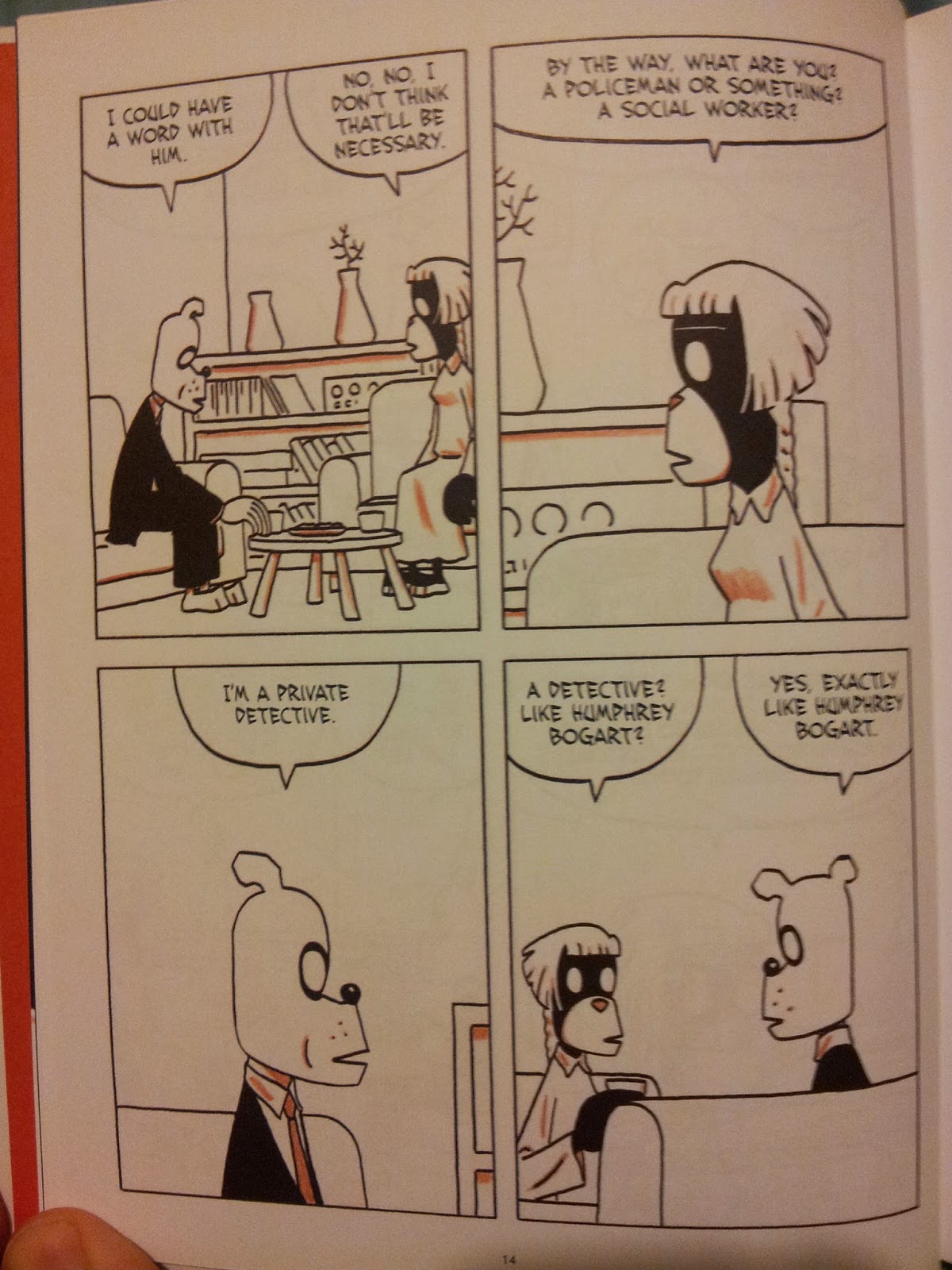 Why is this a lesser work? Because of it's inconsistency in storytelling. It feels as though the cartoonist had three separate ideas and tried to combine them all in Lost Cat. They feel disconnected. How about a detective who finds a lost cat? How about a H.G. Wells style Invasion of the planet by aliens? How about a detective on an investigation that goes sour? Th3se three main plots drive the book, but they don't mesh together well enough. The individual components taken on their own might work well, but they don't combine organically enough in the book. What we get in the end is a story about loneliness and trying to connect, desperately to anyone, or anything, no matter how deceitful. In this case, the woman turns out to be an alien and the vanguard for a global invasion. This big reveal doesn't feel earned, it just happens. I guess she is an alien? Thematically it fits, the woman disappeared and his world was destroyed, both mentally and physically. He always felt alienated and even though he has a chance to leave with her, she isn't who he wanted her to be. She's a lie and he cannot accept it. He'd rather be destroyed than be lied to. It should work, but it doesn't because this isn't a book about aliens, or destruction or lies. It's a book about loneliness and how difficult it is to find someone to be with. The two instances of foreshadowing feel tacked on as a last minute way to conclude the book. It robs the reader of the dramatic climax the book desperately needed.

Is it a bad book? No. Not by any stretch of the imagination. I think misguided may be more appropriate. Most of Jason's books have always integrated fantastical elements in their plots. It always seems to drive the story of our protagonist forward. Those elements are mostly integrated in the plot from the beginning. Frankenstein monster, time travel, pirates, zombie invasion, those are all included in the premise of the story and the characters transcend the basic premise of the genre. In The living and the Dead, a young man falls in love with a woman, but his efforts to court her are thwarted by the zombie apocalypse. When they are finally united, it feels earned, like the book was working towards it's goal the whole time. In Lost Cat, the sci-fi element feels like an afterthought. Almost like it was either forgotten on the first draft, or that it wasn't fitting properly in the story and was stapled on after the first draft. When we reach the end of the book, the pay off feels unearned. Thematically, it works, but narratively, it doesn't (if that makes any sense).


I rarely talk about the books themselves, the physical object. I will try to do so moving forward as, in some cases, it is important. Fantagraphics has done a tremendous job with this book. The hardcover format has a fantastic bright yellow cloth spine with bold black letters announcing the title. The primary colours on the front and back are black, white and some orange to add texture and depth to some images. The white font contrasts nicely with the black cover. The design of the cover is also great. It shows the detective opening the door and looking straight at the woman, but she is on the back cover. They are so close, yet worlds (or spines) apart. It also emphashizes the theme of loneliness as he cannot reach her. They are separated by an otherworldy yellow spine. It's a really nice looking book. Fantagraphics has been publishing them in this style for many years and it's absolutely gorgeous.

I wouldn't recommend the book to those who haven't read any other work by Jason. I Killed Adolf Hitler, Werewolf of Montpellier, You can't get here from there, and particularly, Hey, Wait... are all titles you should seek out first. If you've read some of his work before, you can find much to appreciate in Lost Cat, but remember that it may leave a sour taste. Jason is a true master of graphic storytelling, but this book is not his finest piece.

Finally, if you're interested at all, check out Jason's Blog Cats without Dogs. He posted as few process pieces around the time the book came out. Script and thumbnails, so go and take a look. Additionally, he has addressed some of the criticism he received from the book and answers some questions about Lost Cat
Posted by Leblanc_phil at 05:13